Precious Calabrian jewel set on the Costa degli Dei, elegant and unique, the B&B CASA ANGELIERI resides on the beautiful scenery of the Mediterranean Sea, to offer a unique experience of hospitality and professionalism.

Come and visit us for a relaxing and remembering stay.

The Casa Angelieri B&B is born from an idea of ​​the owner Francesca Angelieri, owner of the ancient structure, inhabited now by this house.

Overlooking the cliff right in front of the sea, it overlooks an enchanting and endless landscape. Situated in the center of the village, it is only a few steps away from the renowned square of the republic and the castle of Murat where the attention of tourists is concentrated.

The B&B Casa Angelieri was authorized with the determination no. 30 of March 15, 2011 by the Provincial Administration of Vibo Valentia and commencement reported to the mayor of the municipality of Pizzo and to A.P.T. of Vibo Valentia on April 15, 2011 The property, dating back to the 1800’s ancient residence of the Baronial House of the Angelieri family, has been adequately restored and converted into a comfortable and cozy B&B, allowing you to spend your days in complete relaxation and enjoy the truly unique landscape that reaches on to the horizon of the Stromboli.

The elegantly furnished property has 6 rooms with bathroom, with a total of 12 beds, shared space for breakfast. The outside garden completes the facility.

Casangelieri is the ancient home of the Angelieri family, the noble family of Pizzo Calabro, with the family crest on the walls of the building as evidence of its history.

The B & B CASA ANGELIERI enjoys a privileged location, guarded like a treasure in the historic center of the old fishing village, in the shadow of the mighty Aragonese castle, in the maze of characteristic streets.

The proximity to the main attractions of historical and artistic interest (the 16th century mother church, the church of Piedigrotta, a sacred site carved into the rock, the Aragonese castle reminiscent of the sad fate of Gioacchino Murat) and the nightlife of Pizzitana (main square, view from Piazza della Repubblica) makes B&B CASA ANGELIERI even more exclusive.

To mentzion all attractions: naturalistic – the blue of the sea and the scent of the Mediterranean scrub, the food and the wine – the famous ice cream “Tartufo di Pizzo”, Cold cuts, cheese, wine and the maritime culinary tradition.

Although surrounded by the main attractions of Pizzo, B&B CASA ANGELIERI retains an intimate and tranquil atmosphere, in which its guests are wrapped in a perfect fusion, that reflects the ancient hospitality and cultural heritage of Magna Graecia.

The palace offers from all its rooms a direct view of the sea, a wonderful view of Italy and gives the impression of being on a suggestive cruise ship. Nature, beauty, but also comfort: each room has a safe, air conditioning, Wi-Fi, TV and bathroom in the room, all accompanied by old family furniture.

Pizzo Calabro is a village on the coast, perched on a promontory in the center of the Gulf of Sant’Eufemia. Its territory includes a jagged coastline, distinguished by sandy beaches in some stretches and rocks in others. On the north-east coast, from a mediterranean pine forest to the mouth of the River Angitola stretches almost 9 km of large sandy beaches. Just behind the river rises the mountain of Vibo, which borders the territory, which has its boundary with Maierato and Vibo Valentia, on the ridge of the hills. Further to the south lies the tufaceous stone on which Pizzo has developed, the coast becomes rocky with numerous coves and areas rich in natural rocks, as well as several caves, including the Blue Grotto, reopened in recent years after various interventions for protection against wave motion.

In the central area we find the beach of the Seggiola, a small fjord in the center of the tufaceous boulder on which side the village dominated by the Aragonese Castle erected in the second half of the 15th century by Ferdinando I d’Aragona as well as the Marina, a pretty seaside resort as well as nightclubs.

To reach Pizzo by car, from the north of Italy, you can take the A1 Milano-Napoli and continue along the highway A3 Salerno-Reggio Calabria until the junction of Pizzo. By train there are two stations that allow you to reach Pizzo: Lamezia Terme and Vibo Valentia-Pizzo. The nearest airport is Lamezia Terme, which is about 25 km from the center.

Here are some pictures of our rooms 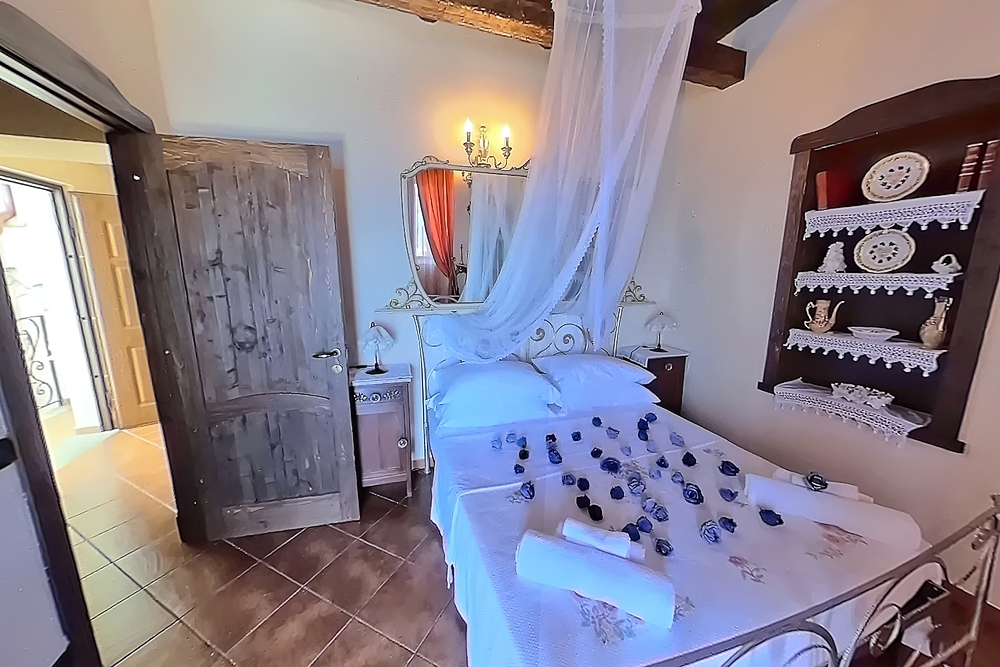 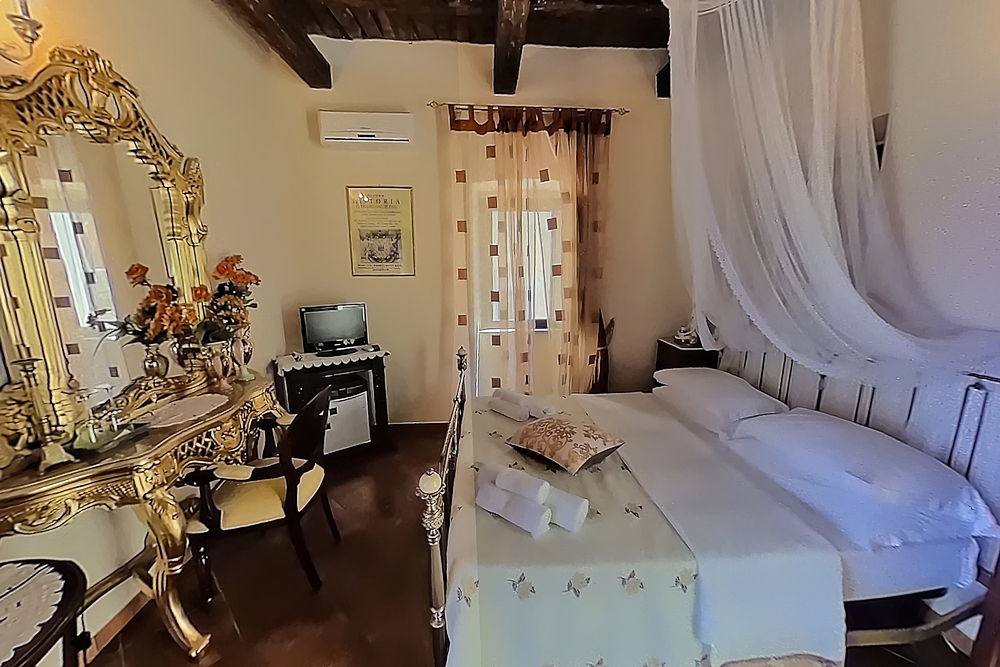 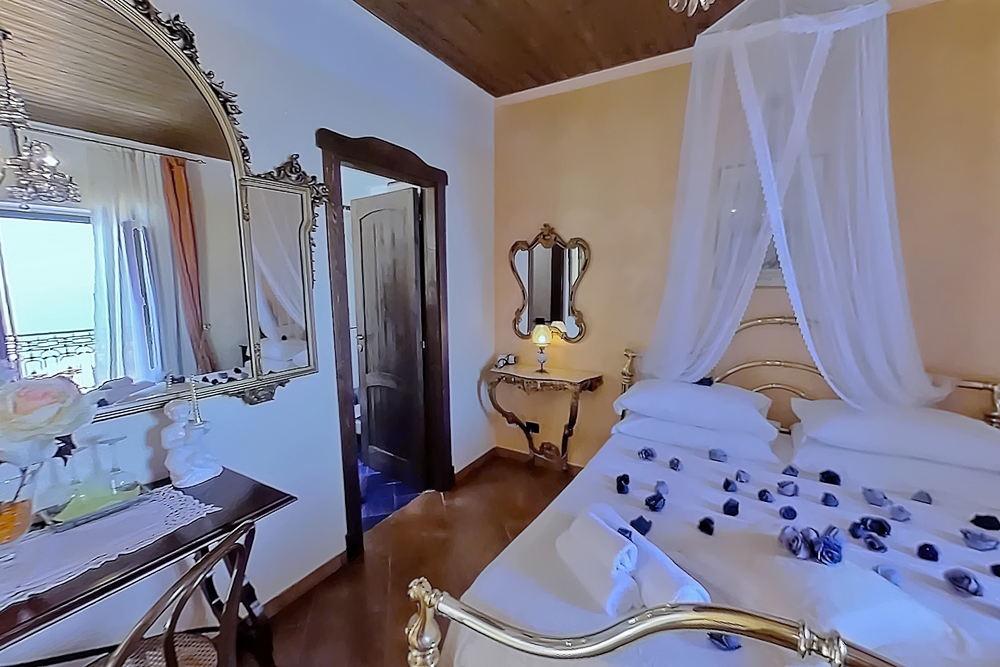 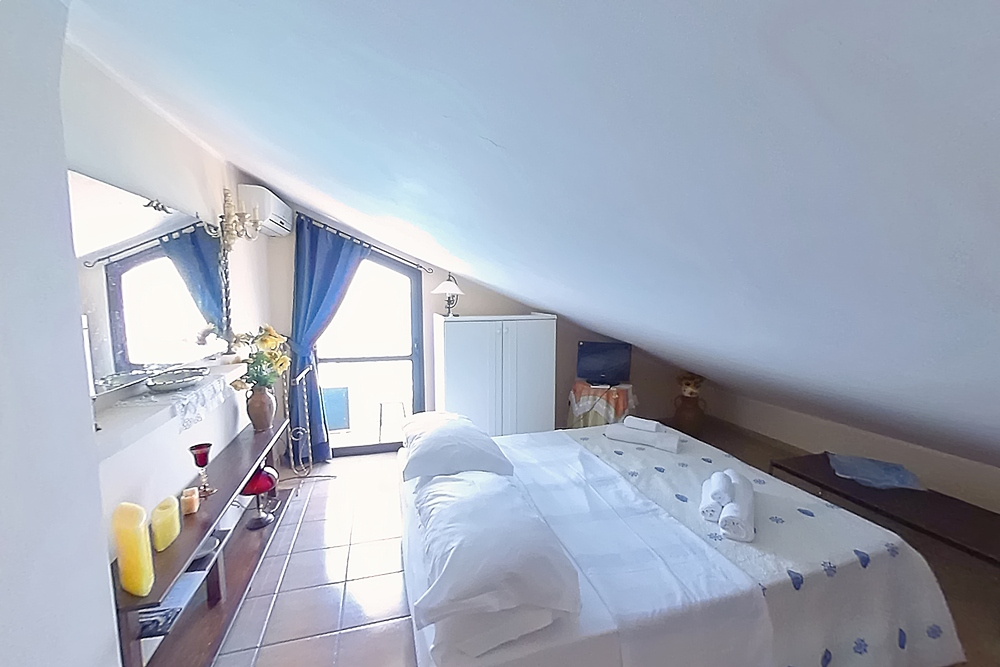 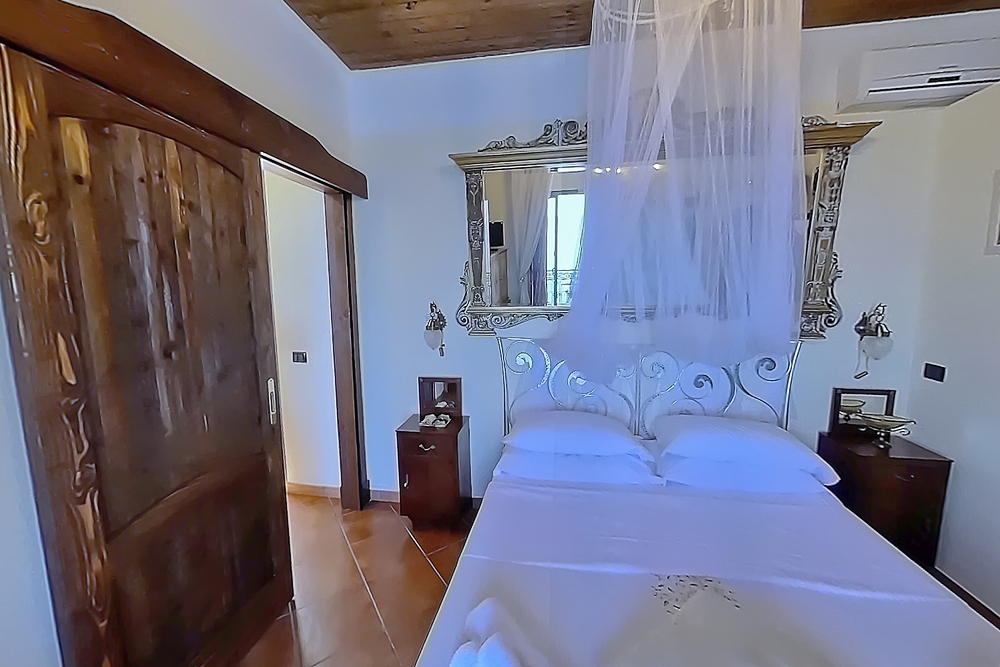 Here are some pictures of our location 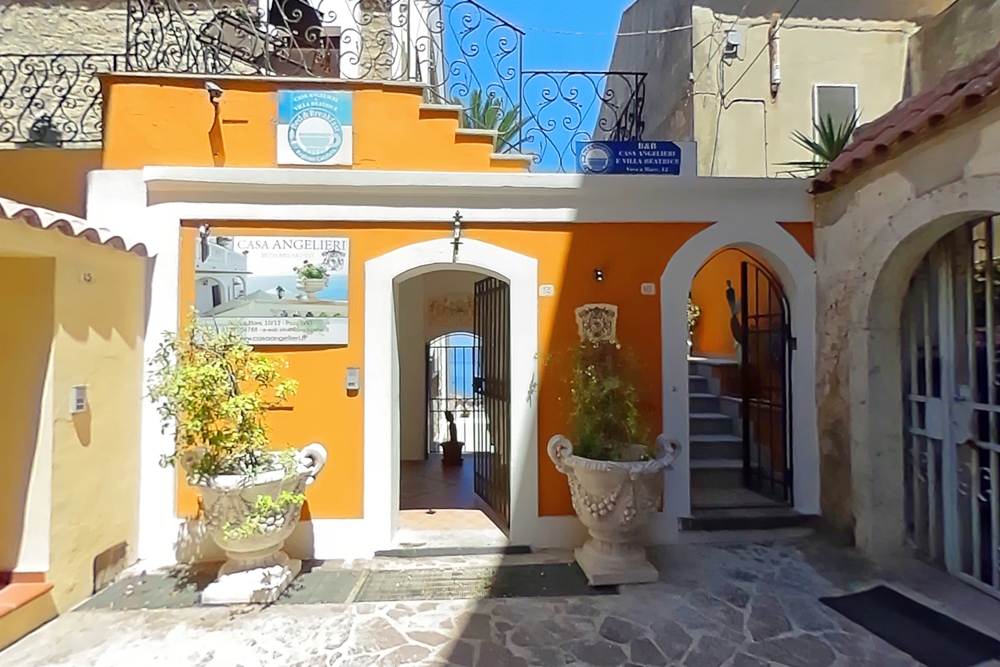 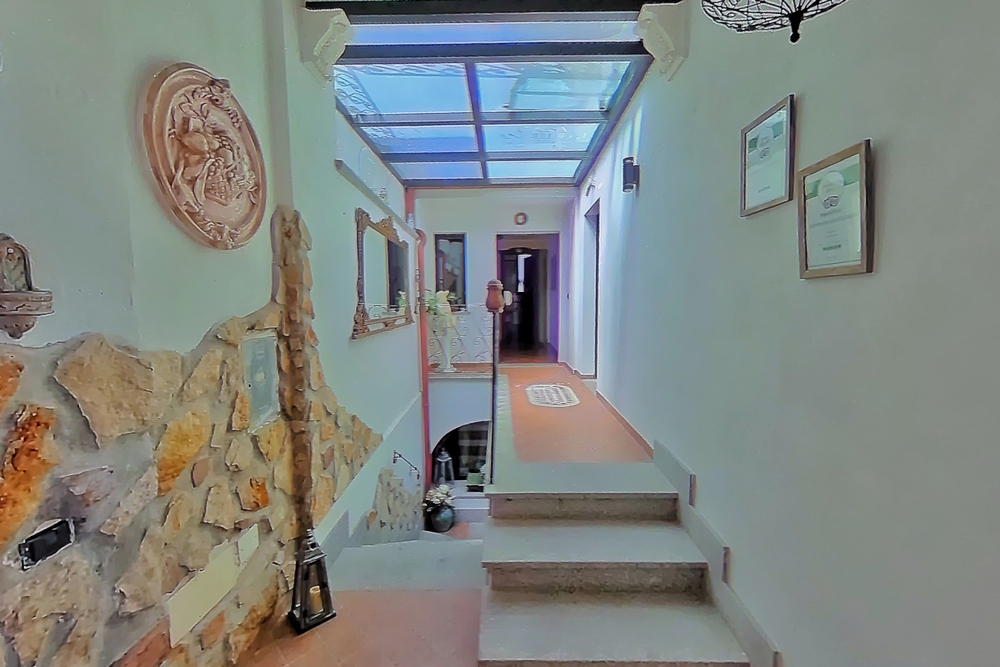 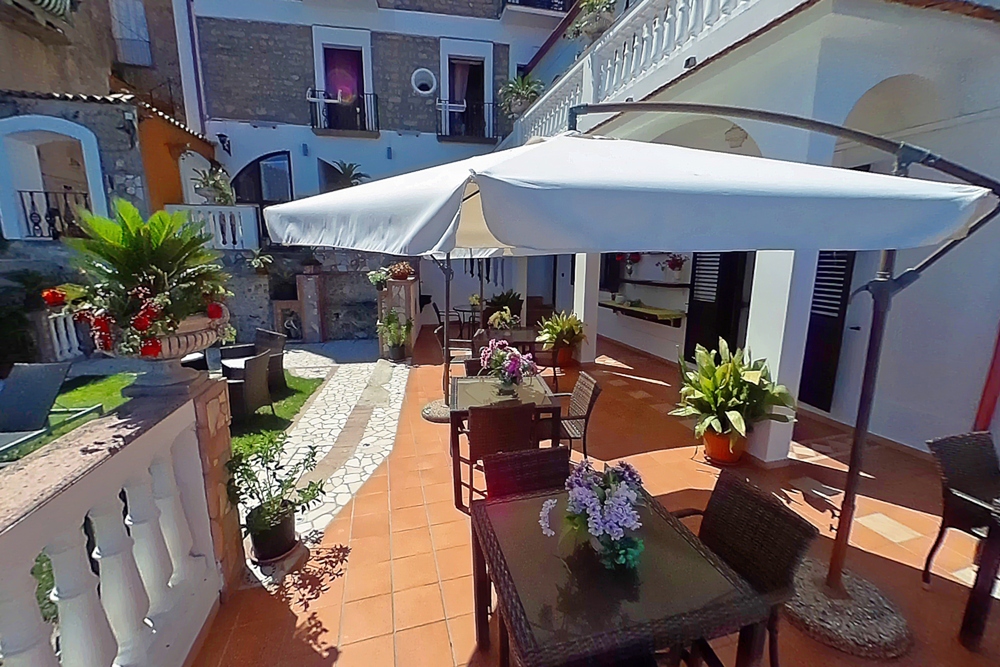 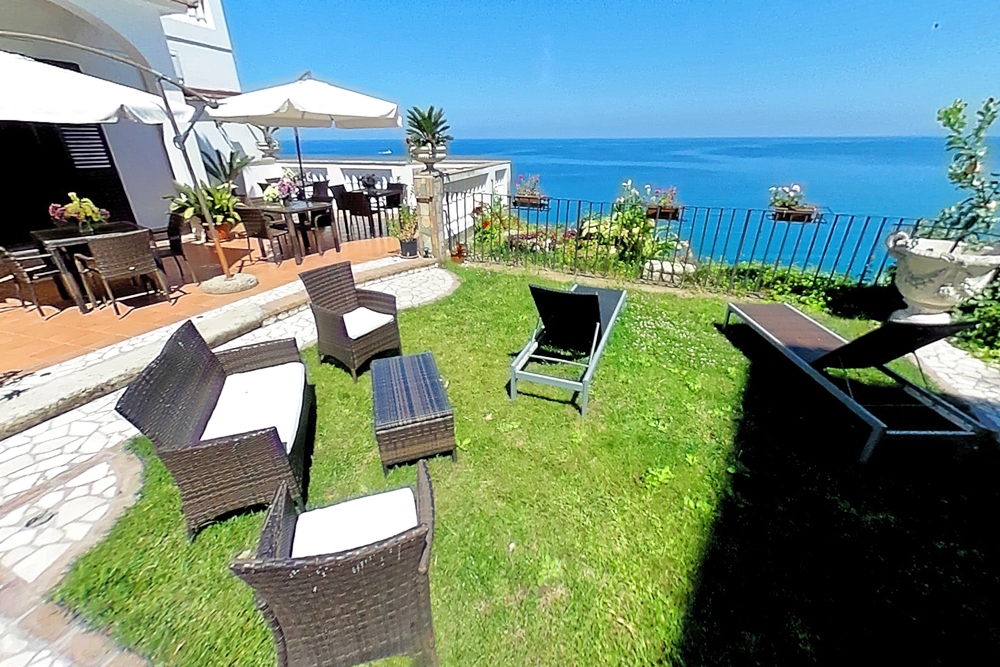 For its guests, the B&B CASA ANGELIERI offers unique moments of precious relaxation in its exclusive and unique rooms. They are characterized by a refined style that reflects the noble origin of the ancient residence and reminds of the myths and deeds of this land, which was once called “The land of gods and heroes”.

Each room has its own little surprises … for our guests to discover!

This room, dedicated to “Mother Earth”, is decorated with furniture and colors reflecting the warmth of the sun.

The fragrance of citrus and aromatic herbs of the Mediterranean fill the room and lead our guests to new sensory experiences.

The room dedicated to Calipso, the black man who was taking care of Ulisse after the anger of Scylla and Charybdis, will welcome our guests with style and sophistication.

The gentle breeze that rises from the sea along the cliffs floods the room with its scent, whose name reminds of the sky goddess.

Enjoy an impressive, typically Mediterranean panorama under the radiant view of the stars of heaven.

This room, dedicated to the goddess of love, evokes the passion of the sunset over the sea with its colors of the fabrics and the style of the furnishings.

You can enjoy this in complete tranquility from the exclusive private terrace which is as heady as the bouquet of a good wine.

Dynamic and adventurous, like the hunting goddess to whom it is dedicated.

The room, reached by a beautiful wrought-iron staircase, is the prelude to the adventures that await our guests to discover our wonderful land and its sparkling aromas for a well deserved break.

This room, dedicated to the goddess of the moon, offers moments of rest and relaxation embellished by the view – from the adjoining balcony – of the enchanting moon that illuminates the sea with elusive silver reflections and populates the coast with seductive shadows.

and take a night tour

We want to make your stay as enjoyable as possible and are trying to be of assistance wherever needed. So please feel free to approach us for any help needed, such as: